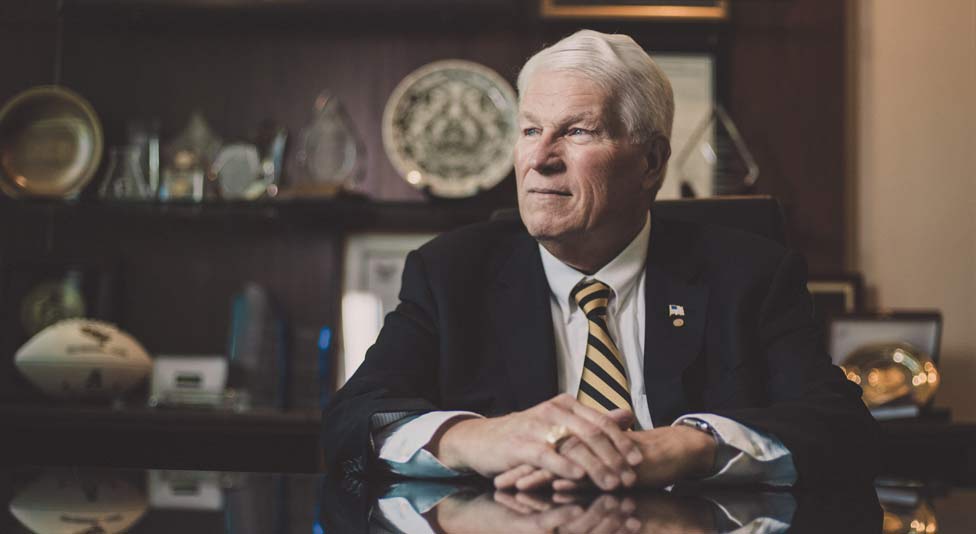 John Hitt transformed a commuter school into one of the largest universities in the country, shattering the traditional belief that such growth would lead to declines in quality. The Washington Post credited Hitt and UCF in 2015 with helping to lead a “national insurgency that aims to demolish the popular belief that exclusivity is a virtue in higher education.”

“In terms of impact, integrity and longevity, there’s never been a university president like John Hitt. There’s John — turn the page — and then everyone else,” said Board of Trustees Chairman Marcos Marchena.

The first in his family to attend college, Hitt knows firsthand the power higher education wields to transform lives, and he worked tirelessly to provide the same opportunity to students. He graduated from Austin College with a Bachelor of Science degree in psychology and earned a Master of Science degree and Ph.D. in physiological psychology from Tulane University.

UCF achieved remarkable strides in academic quality and diversity during Hitt’s presidency. Graduation and retention rates soared. The percentage of UCF students who are minorities increased from 15 to 46. One of every four UCF students is the first in his or her family to attend college.
“Walt Disney and John Hitt have done more to transform Central Florida into a vibrant, dynamic place than any two people,” said former Florida Gov. Jeb Bush. “At UCF, the great success of his presidency and magnitude of his accomplishments have few comparisons in the history of American universities.”
Under Hitt’s leadership, the university opened a thriving honors college and medical school, as well as an on-campus football stadium, and received state approval for a new campus in downtown Orlando and a university hospital. UCF also joined area state colleges in establishing the DirectConnect to UCF partnership that has earned national acclaim for making a college education more accessible and affordable.
​
UCF’s student-athletes excelled academically and competitively during Hitt’s tenure. Student-athletes posted a GPA of greater than 3.0 during the final 21 semesters of Hitt’s presidency. The football team finished as undefeated national champions during his final season as president.
​
Washington Monthly named Hitt one of the most innovative presidents in the country. The Orlando Sentinel and Orlando magazine regularly listed Hitt as one of the most influential leaders in Central Florida, and in 2016 The Washington Post noted that he “is often referred to as Orlando’s most powerful man.”